The latest figures released by NHS England, which cover the period up to July 2020, show that waiting times have continued to rise rapidly, despite the number of new referrals remaining low and activity levels increasing.

As waiting times continue to rise for elective surgery and diagnostic procedures, what can be done to address the backlog?

The latest figures released by NHS England, which cover the period up to July 2020, show that waiting times have continued to rise rapidly, despite the number of new referrals remaining low and activity levels increasing.

As the chart illustrates, the total number of people on the waiting list fell temporarily in March and April, mostly due to a decline in referrals, but is now slowly but steadily growing. More importantly though, the length of time patients are waiting for treatment has increased substantially. 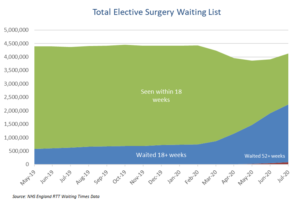 In addition, more than 83,000 patients had waited more than a year for treatment by July 2020. This was a substantial increase compared with a year ago, and represented the highest number of 52-week waiters seen since 2008.

Although there are some positives in the data, namely that activity levels in general and the number of new referrals have increased, there is still a long way to go. In July, despite a significant increase, elective admissions were at less than half of the number seen a year ago.

The number of new referrals has grown strongly since May, but remained well below normal levels, and it appears that the expected deferred referrals from the period March to June have not yet come through.

In a recent article in the BMJ, Neil Mortensen, president of the Royal College of Surgeons of England, was quoted as saying he was disappointed to see waiting lists having increased in July, two months after the NHS had published a road map to restoring routine care.

He said; “We urgently need to build up our hospital reserves if we are to see this winter through. Flu, together with continuing local covid-19 outbreaks, must not bring surgery to a standstill again, or thousands more will suffer.” This illustrates the severity of the issue and the lack of resilience within vast swathes of the UK’s healthcare estate.

The latest endoscopy data told a similar story. More endoscopies and gastroscopies were being performed, with activity levels more than doubling in June and increasing by a further 45% in July, but even so, activity remains well below normal levels.

The total number of people waiting for an endoscopy in July 2020 was around 216,000 – up by 70% compared to July last year, with growth showing no signs of slowing down. 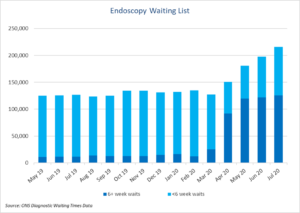 While the number of people waiting for more than 18 weeks has stabilised between May and July, the level is abnormally, and among these patients will be many whose wait continues to be extended beyond 18 weeks. In July, around 126,000 people – more than half of those waiting for an endoscopy – waited over 18 weeks, compared to around 12,000 a year ago.

These numbers are alarming, but not unexpected, and while it’s likely that activity has increased further during August and September, it remains to be seen whether this will have made a difference to waiting times.

At the same time, the figures indicate that we could be heading for a challenging autumn and winter season, and that catching up will be incredibly difficult. The slow recovery of the elective waiting list provides an indication of how long it could take to even discover the full extent of the deferred demand from the lockdown period.

One way or another, capacity will need to be substantially boosted if the NHS is to have any chance of reducing waiting times for elective treatments and procedures. Flexible healthcare infrastructure, such as mobile and modular operating theatres and procedure rooms, can provide a rapid and effective solution to escalating waiting lists.

What is also clear is that this situation will be ongoing for an extended time and needs more than a short-term fix. A modular building, housing an operating theatre, treatment room or ward, can be built close to permanent standard within a very short timescale, and can also be configured and finished to suit each client’s requirements. Such a building provides additional Covid-light space and extra reassurance for patients by offering a completely separate entrance and reception area, as well as a separate patient journey to that in the main hospital.