Home > News and Events > How do our waiting times compare?

How do our waiting times compare?

Waiting times have remained a hot topic throughout the pandemic - and not just here in the UK. But how do our waiting times for elective surgery compare internationally? And what is the broader long term trend?

We have yet to see the full impact of Covid-19 on waiting lists and the times patients will have to wait for elective surgery. Although there is no question that it has caused a temporary backlog in some areas and for some specialties, we don’t know what the effect will be in the longer term, as we are still working our way out of the pandemic.

It can be useful to widen the perspective and look at the longer term trends and the international context, as well as the policies different countries have adopted to manage waiting lists.

Waiting times have been a longstanding concern in many countries, and an OECD report was recently published on the topic. It reviews waiting times across 17 OECD countries, as well as the effect of a range of policies implemented to deal with the issue, using data up to and including 2018-19.

One issue when comparing multiple countries is that the definition, the ways of measuring, collecting, structuring and reporting on the data varies between countries, limiting comparability.

While the mean and the median waiting time, waiting time at certain percentiles of the distribution – and the number or proportion of patients waiting more than a threshold period of time (e.g. 3, 6 or 12 months) – are all valid ways of measuring waiting times, the median is most commonly used for international comparisons.

However, the distribution of waiting times is generally skewed with a small proportion of patients waiting a very long time, meaning the mean waiting times can be substantially longer than the median.

How does the United Kingdom compare?

The OECD study shows that waiting times for elective surgery can vary widely between countries, with waiting times almost 10 times higher in some countries than others.

However, there are huge variations across countries. Overall, waiting times for elective surgery in 2018 were the lowest in Denmark, the Netherlands, Italy and Hungary, while they were the highest in Estonia, Poland and Chile.

The chart below shows the median waiting times for some selected OECD countries with comparable data for different types of surgery.

As the chart shows, the median waiting times for cataract surgery in the UK were lower than the OECD average, but higher than some other countries, including Italy, Denmark and Sweden in 2018. It should be noted that two countries not shown in this chart, Estonia and Poland, had significantly higher waiting times at 180 and 250 days respectively.

Despite waiting times for elective surgery having risen over time, the UK median waiting time in for hip replacements and knee replacements were again lower than the OECD average, and below countries such as Australia, Canada and Portugal.

In Australia, the median wait for knee replacements was one of the highest out of all OECD countries at 209 days, more than 6 months. The OECD average is high for this type of procedure, and was brought up by relatively few countries with very high waiting times (not shown here), such as Chile, which has a median wait of 840 days, and Estonia with 460 days.

In all countries, patients requiring more urgent treatments generally have a shorter wait than those whose health status is less likely to deteriorate while waiting. Therefore, median waiting times for coronary bypass surgery are generally shorter. 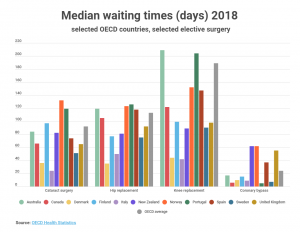 How have waiting times changed over time?

The OECD figures show that, following a period of stability, waiting times for elective treatment (which are usually longest) had started to rise in a number of countries, even before the Covid-19 outbreak.

However, changes to the median waiting time in countries such as United Kingdom and Australia have, although significant, been relatively small from an international perspective compared to, for example, Estonia and Portugal. 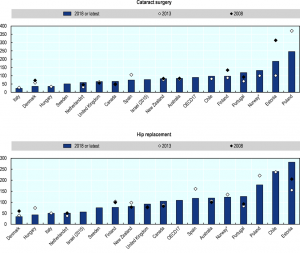 How are waiting times addressed in different countries?

When waiting lists arise, it is generally the result of an imbalance between the demand for and the supply of health services. The right policies to implement will be different in each country and depends on the health system, the financial and political situation among other factors.

Permanent and sustained increases in supply are the most effective way to achieve permanent reductions in waiting times.  However, short-term interventions using occasional additional funding packages also serve an important purpose. By quickly responding to a temporary increase in demand or a short-term disruption in supply, waiting lists can be prevented from rising substantially and causing a backlog, and causing increased waiting times further down the line or over a longer period of time.

Even permanent increases in supply are not a guarantee of success. In some cases additional supply can be offset by an increase in demand, through an increase in referrals, tests and procedures. For example, waiting times for some elective surgery in Canada and Australia have increased in recent years despite additional funding and an increase in activity.

Where there is substantial excess demand, the demand side is also sometimes targeted in order to reduce waiting times. Clinical prioritisation tools that focus on improving health outcomes can improve the referral process and the management of waiting lists.

In the OECD report, New Zealand is used as an example of a country that has tried to improve the prioritisation of patients (but in combination with increasing supply). Following a reduction in waiting times for elective surgery to a maximum of 4 months in 2012, waiting times have declined for many common procedures and are well below OECD averages.

The impact on access to care and health outcomes

A large amount of evidence points to the fact that long waiting times can have negative effects on both access to care and health outcomes for patients. This is a concern with addressing waiting lists on the demand side by rationing waiting times and implementing prioritisation policies.

Patients’ conditions can deteriorate during the wait, especially if the wait is extended or the patient de-prioritised. Although the need for a hip replacement, for example, is not life threatening, living with such a condition long term is debilitating and can reduce the patient’s quality of life substantially.

As well as having potentially serious consequences for patients and being a source of unmet care needs in some countries, long waiting times can also result in inequalities in access. Ideally, access to care should be based on need and not ability to pay.

Some patients will inevitably have more options than others, and on an international basis, there are vast inequalities in access depending on where the patient lives. For example, the maximum waiting time for a cataract surgery ranges between countries from one month in Denmark to 1.5 years in Estonia. Even within a country, there can be substantial differences between access in rural and metropolitan areas.

It is also likely that the Covid-19 pandemic will have impacted very differently on health systems in different countries, but more data is needed to analyse this.

What can be done to improve waiting times in the UK?

Although the UK’s waiting lists are not significantly behind most other European countries, the fact is that waiting lists, and therefore waiting times, have increased substantially in over the last decade. We have also seen Covid-19 impacting on waiting times, and patients waiting more than 52 weeks for elective surgery now accounts for over 8% out of the total 4.7m people waiting for surgery.

To address this, there is a need to substantially expand capacity – and to do this quickly. In many NHS Trusts, there is a shortage of both physical capacity and staff to increase activity levels. One way to quickly and efficiently increase capacity is to use flexible healthcare infrastructure, such as mobile or modular operating theatres.

A temporary theatre can be in place for a longer period to cover works to expand the existing department, or for a shorter period to boost activity and ‘blitz’ waiting lists that have built up over time. Such a solution can be set up as a dedicated stand-alone unit for high-volume surgery, having minimal impact on the hospital’s existing resources. A range of flexible solutions, which can be supplied with qualified and experienced staff if required, are available from Vanguard.

Other strategies are aimed at improving the coordination between primary and secondary care, which can provide better patient flow and valuable insight into the entire patient pathway and waiting times at each stage of the journey. Flexible healthcare can help with this too; for example, a mobile or modular minor injuries clinic can be placed adjacent to the hospital’s main A&E department to help direct patients into the most suitable pathway.

At the moment, demand is lower than previously and there is concern that, once the backlog of referrals materialises, waiting lists will see a sharp further increase, so the time to act is now. Ultimately, reducing the time that people have to wait for access to health services is essential to improving the patient experience – a key priority in most countries.