Home > News and Events > A challenging winter for the NHS

A challenging winter for the NHS

The pressure on accident & emergency departments across the country is growing...

As the coronavirus continues to spread globally and the number of confirmed cases in the UK is increasing, the pressure on accident & emergency departments across the country is growing. This comes at a time that is described as the most challenging for a generation for the NHS.

Delays have risen sharply this winter. Analysis of NHS England data on waiting times by the BBC showed that one in five patients waited over four hours to be seen after arriving at an A&E unit in the months of December 2019 and January 2020, meaning key targets were missed.

In addition, around 25% of those admitted to hospital after being seen in A&E – trolley waits – faced delays of more than four hours before a bed could be found over the same time period. According to the BBC, that is more than two times higher than the numbers seen four years ago.

A&E departments across other parts of the UK are facing similar delays. While additional money is being invested to alleviate the pressures on the NHS and cut waiting times, putting extra resources in place is likely to take time. Mobile and modular healthcare units can be deployed rapidly and provide a cost-effective way of adding temporary capacity at times when it’s needed the most, allowing hospitals to reduce waiting times and avoid trolley waits. 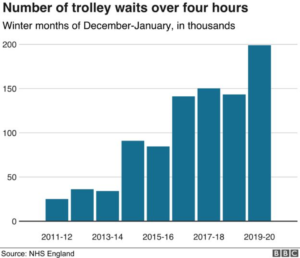