The Newcastle Westgate Cataract Centre has been installed to tackle the significant backlog in patients waiting for routine cataract surgery. Since it's installation, the facility has seen average time spent in the facility decrease from 3-4 hours to between 45 minutes and an hour.

At the Newcastle upon Tyne Hospitals NHS Foundation Trust, a significant backlog in patients needing cataract surgery had been accelerated by the COVID-19 pandemic. Nationally, many patients face waiting times over a year and demand is predicted to rise by 50% in the next 20 years. The Trust at Newcastle provides cataract services to much of the north-east of England and were seeking a solution that could help to increase the quantity of procedures they could perform, and enhance the quality of the patient experience.

Working alongside Vanguard Healthcare Solutions, the Trust explored many options before opting for a modular design for its new cataract centre. The plan was to build a complex which would include three procedure rooms and which would be sited at the Campus for Ageing and Vitality site. The plan was to use an area of the Trust’s estate which had previously been the location for a building that had fallen out of use and been demolished.

The plan was to design a complex which improved patient flow. This included the development of a one-way system for patients, making their journey as smooth as possible. 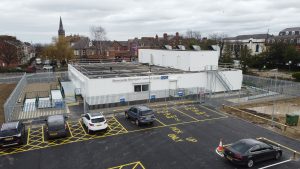 Vanguard worked alongside clinical and other Trust staff who were deeply involved in the design process which included weekly meetings to ensure that the space was optimal for their specific purpose.

This collaborative exercise saw the creation of a three-theatre complex which was designed to perform up to 1,000 cataract procedures a month. Alongside the three theatres, there are also two staff wellbeing areas to help facilitate social distancing, as well as storage and utility rooms.

Design work began in October 2020 and installation started in early December 2020. The Newcastle Westgate Cataract Centre officially opened on 6 April 2021, a total turnaround time of 7–8 months from concept to the opening of an operational three theatre facility. The process was slightly delayed by the third lockdown and Christmas break. The facility was installed in just 4 months, a far shorter time than would be expected for a traditional building.

The design and patient flow of the building was key. Patients are pre-assessed before being booked for the procedure, with those who are considered higher risk being treated in the main hospital building.

The improved patient flow has allowed the average time spent in the facility to decrease from 3–4 hours to between 45 minutes and 1 hour. The unit performs up to 1000 cataract procedures per month. The Trust has received a large amount of positive feedback from patients and their families as well as staff working in the building. One of the matrons who had been involved throughout the project highlighted she had seen staff ‘flourish’ in the new building.